I was trying to install Windows 7 Home Professional (64-bit) on a Virtual Box (4.1.2 r73507) VM. With the default VM setup, I kept getting an Error 0xc0000225 while the Windows 7 installer was starting. After reading some sites that stated that this was likely a BIOS issue, I edited the VM configuration to change the Chipset to "ICH9" and "Enable IO APIC". With this change the Windows installer was able to start without errors. 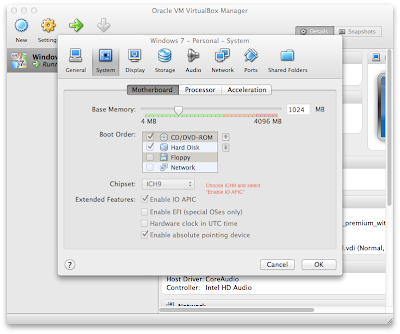 Interesting article about someone’s experience with an Android phone – the Samsung Charge: Why My Mom Bought an Android, Returned It, and Got an iPhone. This is an article by someone who loves Android. I think for anyone who doesn’t want to root their phone, the Android experience is hit-or-miss. Between Google and the various carriers, there’s no consistency and eventually that leads to a diluted brand.

The problem with Android is that the hardware manufacturers do not want to be generic phone device makers.  They want to differentiate themselves in order to compete successfully in the smartphone market.
However, to differentiate themselves, they have to muck up and lock down the Android OS, install their own version of the user interface, and install crappy apps that you can't remove.  They also encrypt the OS so you cannot modify the system.
This is why the experience is so poor for Android phone users - other than the ones who use the generic Android OS, which is few and far between.
I wonder why the author did not purchase a Droid Incredible for his mom since he likes it so much????
Oh.  It is no longer available.
The other problem with Android is that there is a new version of the smartphone every single month.  It is the flavor of the month phone.  Thus, over time, incompatibilities occur between the new versions.

With Honeycomb, Google pretty much threw out the openness argument. There’s no 3.x release at http://source.android.com/source/overview.html. Another interesting data point is the absence of Android phones in Flickr’s most popular cameras list. (The only Android phone shows up in the cameraphone segment.)