A flaming article on Macenstein about the use of GB in describing hard disk sizes and the resultant frenzy at Digg shows the lack of understanding of standards amongst most people. This post is to clear the air.

So what is going on and who is "right"?

The International System of Units (SI) has defined standard names for prefixes for over a century. The prefix kilo is defined to be 103, mega is 106, etc. This is the standard.

The confusion is due to the fact that the computer world - memory makers and operating systems - decided to reuse the same prefix names for 210, 220, etc., in violation of the SI standards. In order to alleviate this confusion, since November 2000, the International Electrotechnical Commission (IEC) has defined standard prefixes for binary multiples. The prefix kibi is 210, mebi is 220, and so on.

So the HDD manufacturers are the ones who are adhering to the SI standards. That 1 GB drive is 1 000 000 000 B and the operating system should be reporting it as 0.931322575 GiB a different unit from GB. One can only hope that operating systems and memory manufacturers start using the IEC standard for binary multiples.

It's interesting to note that the Google Calculator propagates the nonstandard prefixes. For example, it reports 1 gigabyte as 1 073 741 824 bytes.

The Targus Notebook Chill MatTM is a simple device that provides external cooling for notebooks. It consists of of two metal plates between which a pair of 1500 rpm fans are sandwiched. The fans are powered by a cable that connects to the mat on the middle of the right edge, and any USB port of the notebook being cooled. The cable includes a delicate switch in case one needs to turn off the fans.

In my testing with a 15.4" wide screen notebook, I found it to be good at cooling over extended use for several hours. No more burnt laps! As an added bonus, the fans are really quiet. Perfect for any surroundings. The device weighs about 15 oz (425 g) making it fairly portable. The mat consumes about 1 W of power. At 20 USD, this is a great buy.

Having received an invite to Grand Central's Beta program I've had the opportunity to evaluate it for a few days During this time, I've been able to play with several of the features that it offer. At first glance, the Grand Central system appears complex and useless. This post should demystify the service and explain its uses.

So what is Grand Central? This picture explains the service at the most basic level:

Grand Central offers a single phone number, in an area code of your choice, which can be simultaneously forwarded to all of your registered phone numbers - home, work, cell, etc. Think of it as your universal phone number that never changes even if you change jobs, cell phones or your other phone numbers. When a call comes in on your Grand Central number, it is sent to all your real numbers and you can answer it from any one.

Calls can be routed based on the classification of your contacts or be global routing. For example, you can choose not have work calls sent to your home number or send only calls from family to your cell phone. You can also send specific types of callers to call screening.

The next logical extension is the ability to customize your greeting for callers based on the group they belong to. You can also set a specific greeting for a specific contact. These greetings can be recorded from any your registered phones; so no need for computer-based solutions like recording a WAV file and uploading it.

Since Grand Central is right at the middle of your incoming calls, you can use the service for call screening and also to record calls on the fly.

The Web Call button feature allows people to call you from your website or blog without knowing your Grand Central number. This is similar to other anonymizing services like Jangl. I've setup this feature on my blog (but it's sent straight to voice mail). Try leaving me a voice mail on my Grand Central number instead of leaving a text based comment.

I've just highlighted some of the best features of Grand Central's services here. They have more details on their web site. As of now, the services are in beta and free but this is definitely a powerful service. It's no wonder Google acquired Grand Central recently!

The SPH200D Dual-mode Cordless Phone from Netgear offers one of the most convenient ways to use Skype. It's a cordless phone that plugs in directly to a router and allows one to use Skype without a computer. It can also function as a cordless phone for plain old telephone service (POTS). Hence the "dual-mode" in the name. The phone uses Digital Enhanced Cordless Telecommunications (DECT) to connect up to four handsets to the base station.

Based on all the positive reviews and feedback from other users, I purchased the phone from Amazon.com for $165.85 with a $30 mail-in-rebate. The box arrived within a few days with the following contents:

It was a breeze to setup the base station and the handset. Once I turned on the handset, the system walked me through a couple of selections for country code and area code, reminded me about the absence of emergency calling (9-1-1 in the United States) and then reset itself to start Skype. It then asked me to login in to my Skype account. I had to use the multi-tap interface to login and voilà I was logged in. (I later discovered that I could have used a web-based interface on the base station to enter my sign-on information.) I had access to all my contacts, and the phone displayed my Skype Out balance correctly.

Then things turned south. I tried making a call and there was no voice. Neither the earpiece not the speaker worked. With no obvious volume controls, I started playing with the settings until I realized that the keypad had the volume controls built in. Setting the volume to max had no effect either. At that point, I deregistered the handset from the base unit to see if that would help. Bad move! After that I just couldn't get the handset to register again. The manual had no information about this either. The base station comes with a password protected web server with default user admin and password admin but I couldn't get to that either.

With the inevitable Google searches I stumbled on three key pieces of information:

Armed with that information, I reset the device and paired the handset to the base station. This time I used the web-based interface to enter my Skype account information. I also noticed that the default connection was using 10 Mbps but that I could switch it to 100 Mbps to match the rest of my LAN. After this, the phone started exactly as advertised. No problems at all with voice even on the speaker phone.

All-in-all, despite the hiccups, I'd strongly recommend this phone. Feel free to Skype me

Mashable has an interesting article on seven disruptive VOIP services:

Of these services, I am looking forward to using GrandCentral once Google opens it up. I see some use for Jangl at times. Nimbuzz doesn't quite work as advertised on my Sony Ericsson T616 while txtDrop seems to have just dropped the SMS. I haven't used any of the others. 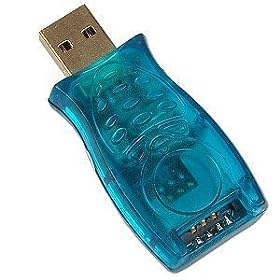 I recently came across a cheap little device for reading SIM cards. It was available from Meritline for less than USD 5 with free shipping. Curious to see what it was like, I ordered one.

The device came in a small package along with a mini CD containing drivers. The packaging advertised the device as the LEAD TIDE Sim reader. Like most things these days, it's made in China. The device has a USB 1.1 interface. There was no product code or number anywhere on the packaging.

Installing the drivers for the device turned out to be harder than I expected. The mini CD's autorun installed some stuff but Microsoft Windows XP couldn't install any suitable driver for the device. The mini-CD had several top level directories with what appeared to be product codes but I couldn't match any to the device itself since it had no product code. Google searches revealed that I wasn't alone in my endeavors to get the device working. Further digging revealed pointers to some third party drivers that work with similar devices but I didn't have any success with it either.

For now it seems to be USD 5 down the drain.