Last week, Google announced that they are moving the Google App Engine out of preview status and changed their pricing model. The general buzz is that the new prices are significantly higher and people are disappointed with Google. Here's a comparison of the prices between Google and AWS specifically looking at storage.

Google offers the Blobstore API, which is somewhat equivalent to Amazon's Simple Storage Service (S3). Google's free tier offers 5GB which is same as Amazon's free tier except that Amazon offers that for just a year while Google has no time restrictions. In the paid tier, Google charges a flat $0.17/GB/month. Amazon on the other hand has a tiered pricing scheme based on three factors - amount of data, location of the S3 bucket and, redundancy. Amazon's prices in the US Standard region range from $0.14/GB/month (for less that 1TB) for the nine nines redundancy and reduced redundancy storage is even cheaper ranging from $0.093/GB/month to $0.037/GB/month.

Here's a graph showing the pricing differences between the Blobstore API and S3 focusing just on the US Standard region for S3. 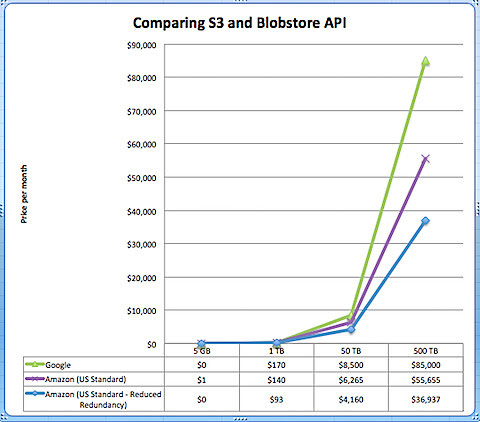 For the free tier (under 5GB), Google is cheaper, but once you exceed that threshold, S3 is the way to go.

What is the redundancy of the Google offering?